About Conference and Target Audience at Smart Materials Congress 2020,Amsterdam 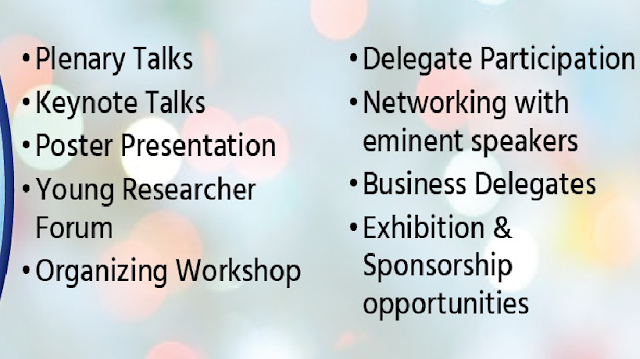 Smart Materials Congress 2020 which includes prompt Keynote Presentations, Oral Talks, Poster Presentations and Exhibitions. It aims to assemble the Researchers in Material Science & Nanotechnology, Scientists, Industrialists and Students across the world to meet and discuss the future of  Materials Science  and Importance of Material Science & Engineering in today’s world. 2 nd International Conference on Smart Materials and Nanotechnology which takes place during May 25-26, 2020 in Amsterdam , Netherlands  to provide their research results, new ideas and practical experiences. During this year’s Conference, we tend to hope that you simply can grasp the chance to rekindle in-progress connections and spark a new one together with your colleagues from around the globe. With members from around the world centered on learning regarding Smart materials and Nanotechnology, this is often your single best chance to achieve the biggest assemblage of participants f
Post a comment
Read more 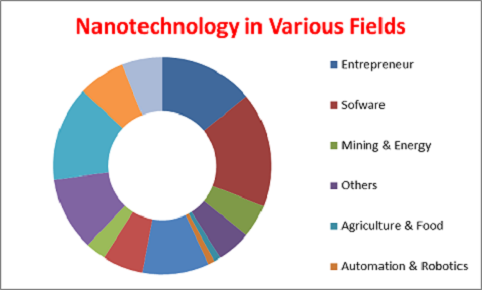 Nanotechnology is doing very well abroad in nations such as USA, UK, Netherlands, Singapore, Germany, and China etc. in terms of R&D. There has been important development towards the usage of Nanotechnology in cosmetics, food, and textiles.  Nanomedicine is still in R&D stage and extensive growth is yet to be expected and intensive research is being conducted in breakneck speed. Materials Engineering is designed to propose comprehensive settings that report topical improvements and new strategies for expansion of advanced materials for global necessities with an objective to connect a dialogue between industries and academic administrations and knowledge transmission from research to industry. Surface Science and Engineering, Biomaterials and Tissue Engineering, Materials Engineering, Energy Materials, Mining and Metallurgy, Materials Chemistry, Polymer Technology, Emerging fields in Materials Engineering and Nanotechnology are the essential areas which is cov
Post a comment
Read more

Very Warm regards to Smart Materials Congress 2020 which is going to held on May 25 – 26, 2020 at Amsterdam, Netherlands . As the commercial capital of the Netherlands and one of the top financial centres in Europe, Amsterdam is considered an alpha-world city by the Globalization and World Cities (GaWC) study group. The city is also the cultural capital of the Netherlands .  Amsterdam's main attractions  include its historic canals, the Rijksmuseum, the Van Gogh Museum, the Stedelijk Museum, Hermitage Amsterdam, the Concertgebouw, the Anne Frank House, the Scheepvaart museum, the Amsterdam Museum, the Heineken Experience, the Royal Palace of Amsterdam, Natura Artis Magistra, Hortus Botanicus Amsterdam, NEMO, the red-light district and many cannabis coffee shops. They draw more than 5 million international visitors annually. The city is also well known for its nightlife and festival activity; several of its nightclubs (Melkweg, Paradiso) are among the world's most
Post a comment
Read more

Session on Nanorobotics at Smart Materials Congress 2020,Amsterdam on May 25-26,2020

Register and get Speaker benefits at International conference on smart materials and Nanotechnology  which is going to be scheduled during May 25-26, 2020 Amsterdam, Netherlands. Meet the world eminent specialists and speakers at our conference to speak concerning new advances within the field of Materials Science & Engineering to develop more innovations that introduced in the field of Materials Science. This will offer a great platform for students and researchers to exhibit their work and obtain recognized amidst the foremost individuals.  A  nanolaser  is a story kind of laser that has its dimensions at the nanoscale range. These tiny lasers can be easily modulated, and this thing makes them ideal for on-chip optical computing . The laser’s intense optical field also increase the effect in non-linear optics or surface-enhanced-Raman-scattering and therefore paves the way toward integrated nanophotonic circuitry. For more Information feel free contact
Post a comment
Read more

Session on Nanophotonics at Smart Materials Congress 2020,Amsterdam on May 25-26,2020 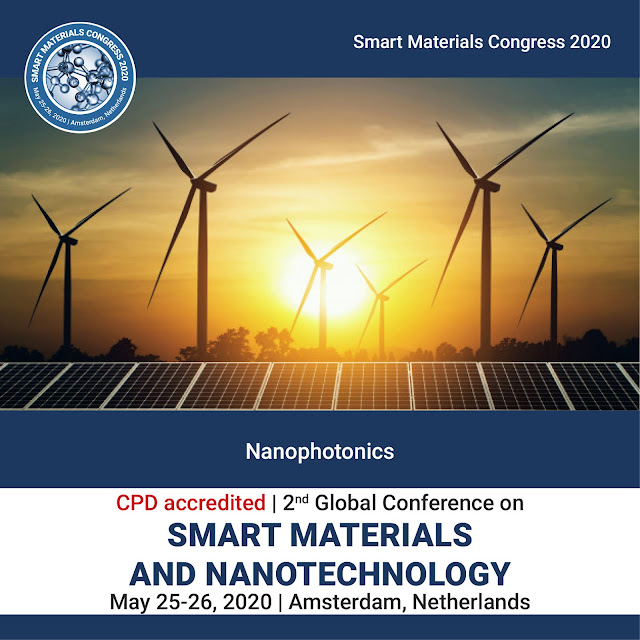 Smart Materials Congress 2020 which includes prompt Keynote Presentations, Oral Talks, Poster Presentations and Exhibitions. It aims to assemble the Researchers in Material Science & Nanotechnology, Scientists, Industrialists and Students across the world to meet and discuss the future of  Materials Science  and Importance of Material Science & Engineering in today’s world. Light behavioral studies on the nanometer scale and the association of those nanometer-scale objects with light is the Nano-optics or Nanophotonics. The main objective of  Nanophotonics  is the use of metamaterials to produce accurate images by the use of superlens. It is a study of optical engineering , electrical engineering and nanotechnology. This theory further contributes to a general category of nanotechnology that is revolutionizing to some of the miniaturized projects and that is treated by R&D departments. SUBTOPICS ·          Communication technologies ·          Las
Post a comment
Read more
More posts